Between actress, Tonto Dikeh and a man who tried to shoot his shot at her (Screenshot)

WORLDBetween actress, Tonto Dikeh and a man who tried to shoot his...
By dailynaijanews

Between actress, Tonto Dikeh and a man who tried to shoot his shot at her (Screenshot)

Nollywood actress, Tonto Dikeh has shared an hilarious exchange between her and a man who tired to shoot his shot at her. 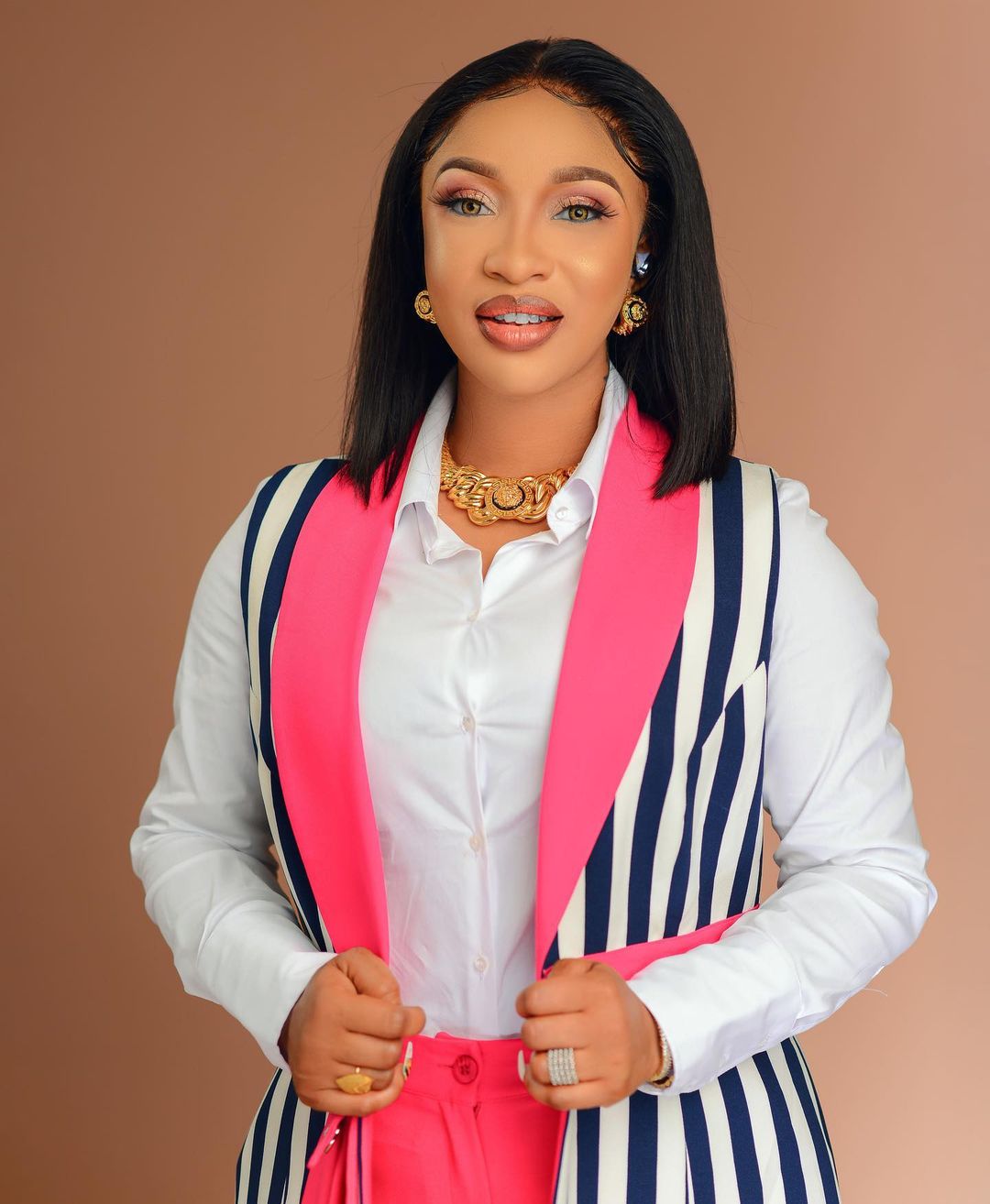 The man had taken to Tonto’s comment section to confess his feeling to her, stating that he finds her attractive as she’s ‘entering his eyes’.

On sighting his comment the mother of one gave an hilarious savage response.

“I no dey give man money or car again ooo, I just say make I tell una. If I enter your eye I beg hold money. Na wetin I dey find now. I don stop Indian love ooo.” She wrote.

Sharing a screenshot of the exchange on her official Instagram page, Tonto Dikeh captioned it, 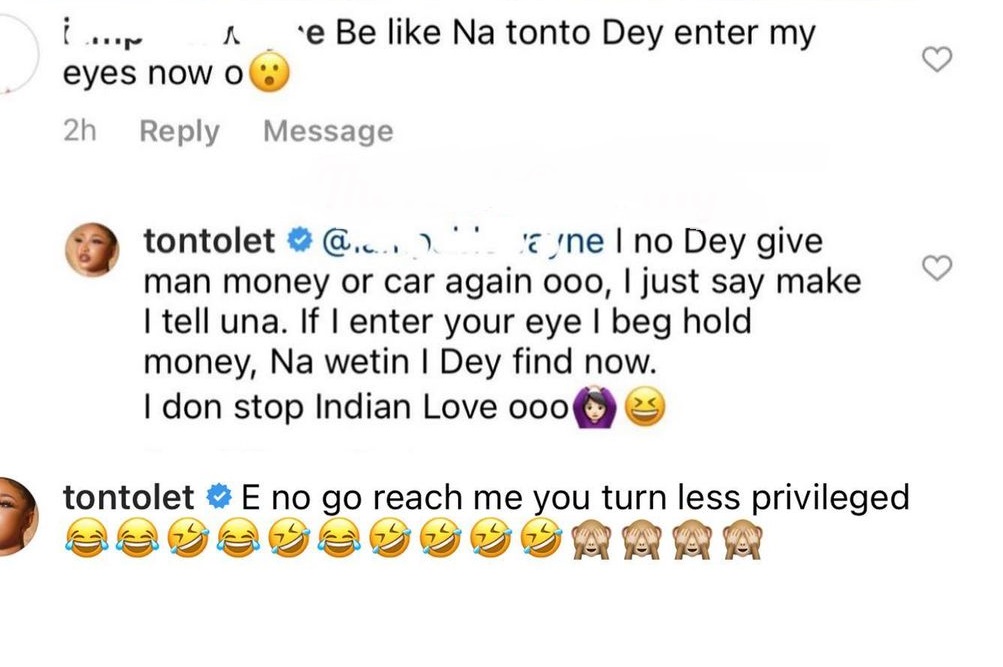 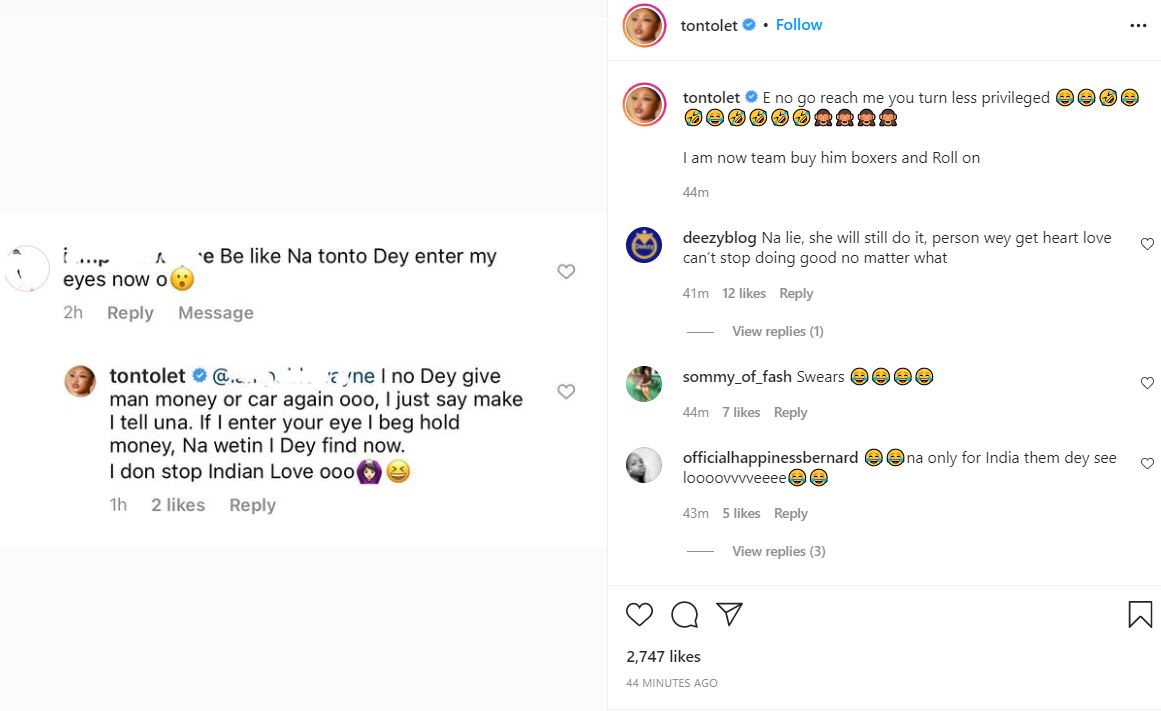 Meanwhile, the popular Nollywood Actress and single mother of one, Tonto Dikeh, has revealed that she has now developed serious trust issues.

Tonto Dikeh who has been through more than one scandalous relationships said due to her trust issues, she now dislikes seeing or being around people.

“I need a PA and a personal nanny for myself. Problem is I have developed serious mad trust issues, I dislike being around or seeing people always. I think I need a robot”.

- Advertisement -
Share
Facebook
Twitter
Pinterest
WhatsApp
Previous articleDisappointed customer shares photo of stilettos she ordered and what she got
Next articleGospel singer, Celestine Donkor explains why she uses a “veil to cover up her seriously favored backside”