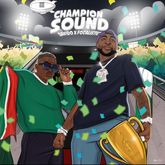 This is not the first time Davido and the South African singer have worked together. They both worked on “Ke Star” the remix.

“Champion Sound” is Davido’s first official single for the year and the fans are excited to have him back. It serves as a follow-up to his critically acclaimed project, his third studio album tagged ‘A Better Time’.

The record was co-produced by talented beatmakers, Caltonic SA and Tee Jay.